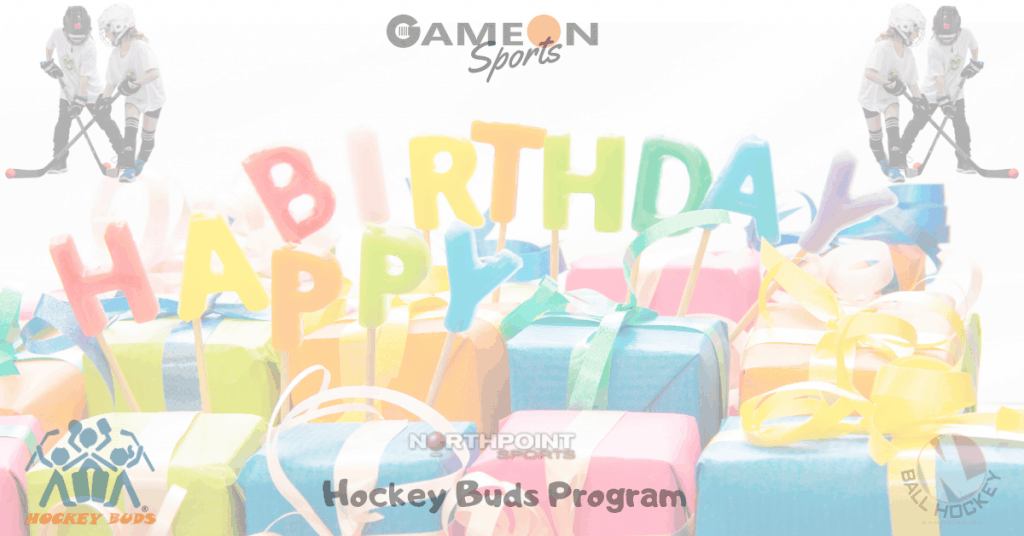 The Hockey Buds program sessions for 3 to 5 yr olds are open to children who turn 3 yrs of age or 5 1/2* yrs of age by the start of the program.

We are aware that sometimes even though children may be younger than the required age group they may be able to participate in such groups at a similar level thus we can accept your child even if they are not quite 3 yrs of age.

*Children younger than six (6) years of age by the start of the program may be accepted into the program or recommended for our 6 to 8 yr old program.

^Children younger than nine (9) years of age by the start of the program may be accepted into the program.

Our Hockey Buds Program has adopted the pull philosophy to engage the children and teach the sport of ball hockey but most of all we want them to have fun.

The pull philosophy emphasizes on the desire for children to participate unlike the push philosophy which may be pushing them into uncomfortable situations. Our program is designed to be progressive and will lead to a positive experience as they are allowed to progress at their own pace. Your little hockey bud may or may not want to take part in a specific exercise and that is completely fine and common. All we focus on is making sure everyone is having fun and being active.

If your child is not following directions, not engaged or being disruptive we ask that you let our coaches use their techniques to remedy the situation before saying or taking any action, we will ask for assistance from you if needed. We do welcome parent encouragement and positive comments during class.

Our coaches are experienced and trained on the best techniques for teaching children class behavior and following directions. With our pull philosophy it takes some patience but it is very effective in teaching behavior.

Progress for your child may be different from the other children, just as children learn to walk and talk at different rates, they will progress in our program at their own pace.

Support for your child through praise of their accomplishments no matter how small they may be will lead to a positive experience throughout their learning sessions. Never compare your child to others as this can lead to frustration.

Parents should support, encourage all the participants and show consideration towards all the children and refrain from any negative comments.

We ask that your child does not enter the playing surface until a member of the coaching staff is there. 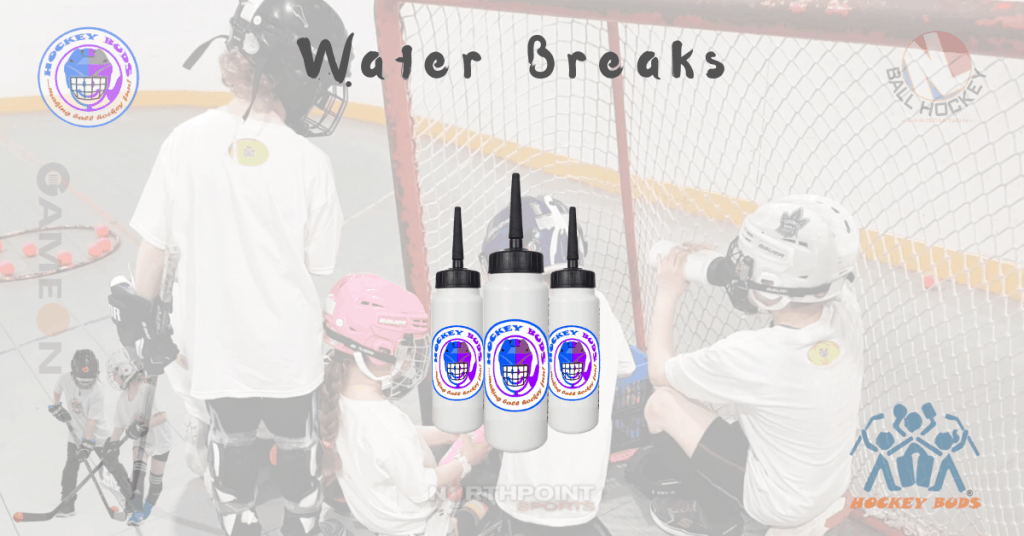 Please have a water bottle ready for your child. We may take multiple water breaks during class depending on the activity.

We discourage kids from getting water whenever they want but rather wait until the water breaks.

We have small crates for each group to place their water bottles in thus making it easier for the Little Buds to have water breaks without leaving the court or parents having to come onto the court.

Our Coaches will assist the children who need assistance to get a drink. Please make sure your child’s name is clearly mark on their water bottle.

We ask for Parent’s support with our policy as it can be difficult for our coaches to management of sessions if children are coming and going at will.

We here at the Hockey Buds Program recommend a water bottle which features a straw top nozzle which will make it easier for your child to get a drink without removing their face protection on their helmets.

Hockey Buds staff and coaches strongly recommend water only for breaks during class. We do provide bottled water if your child needs a refill.

We also forbid food during class. Please snack before if necessary.

If you see signs that your child may have to use the bathroom, please retrieve them or call them to you. Potty issues happen especially at our 3 to 5 yr old age groups.​ 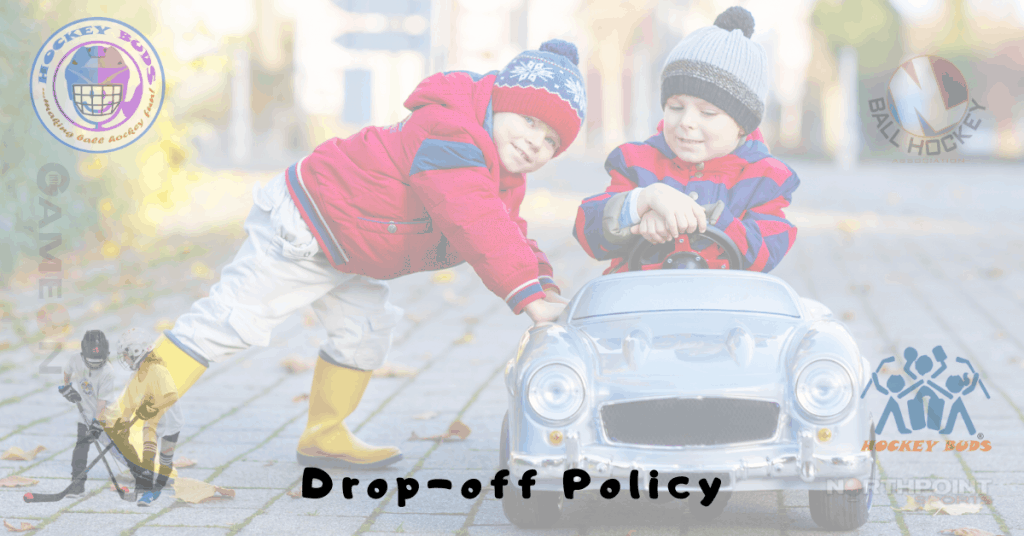 Our Hockey Buds program is not drop-off session.

Parents/caregivers of all participants must stay on-site during sessions in case your child needs assistance.​ 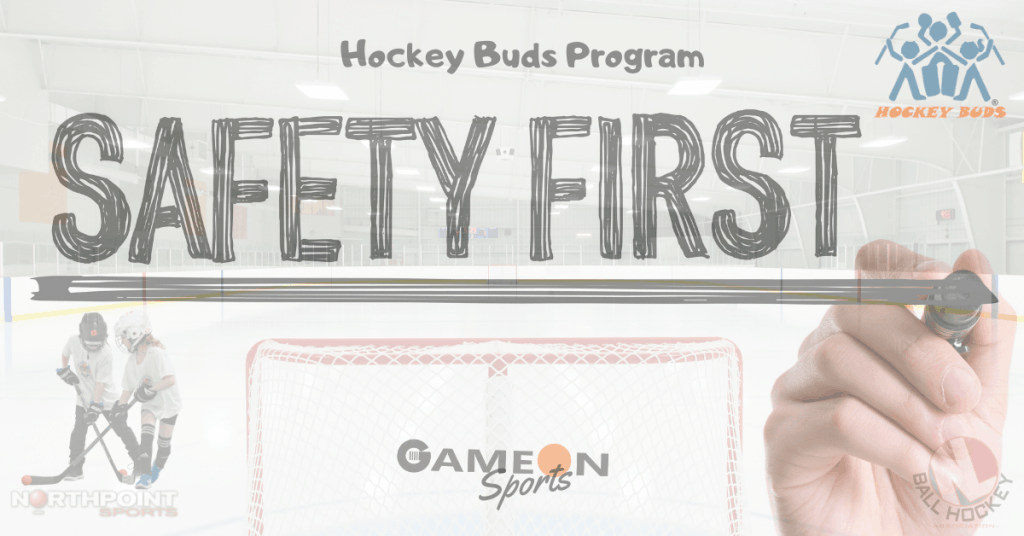 For the reason of safety and due to the focus and attention required for our program sessions Only Coaches, Staff and registered participants are permitted on the playing surface.

The only exception would be if a staff member/coach has asked or given permission for a parent/guardian to accompanied their child.

Siblings are welcome to observe sessions but for safety reasons and due to the focus and attention required in these classes we cannot permit them on the playing surface at anytime prior, during or after the sessions.​

We rotate sides each week for each court thus everyone will get a chance to view their little buds in action.​ 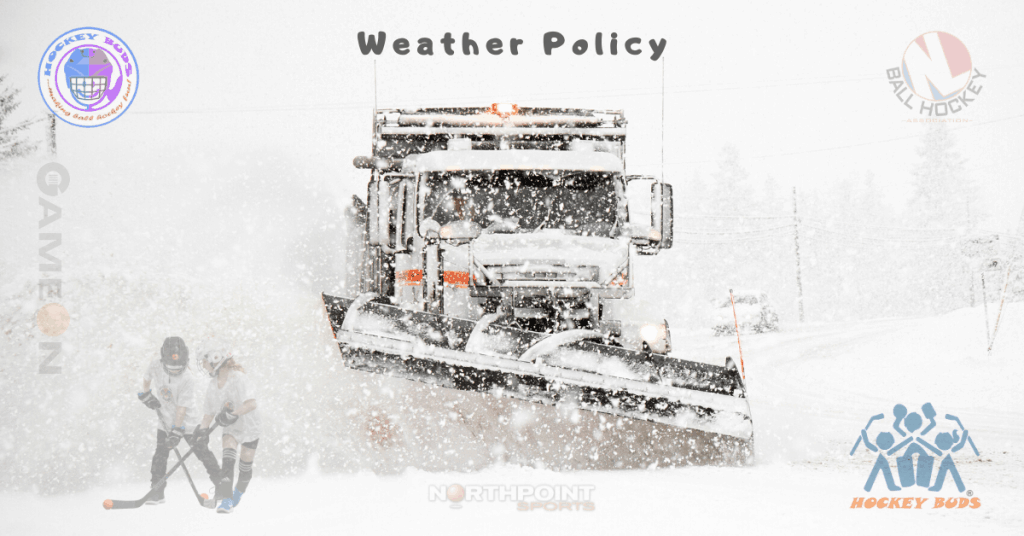 In the event of questionable weather conditions, you will be notified via Email (included on your child’s registration form) and our facebook page if we have to cancel or postpone the program for the safety of the participants.

The Hockey Buds Program cannot provide refunds for cancellations or postponements that are weather-related however in most instances we will schedule a make up class later in the session. 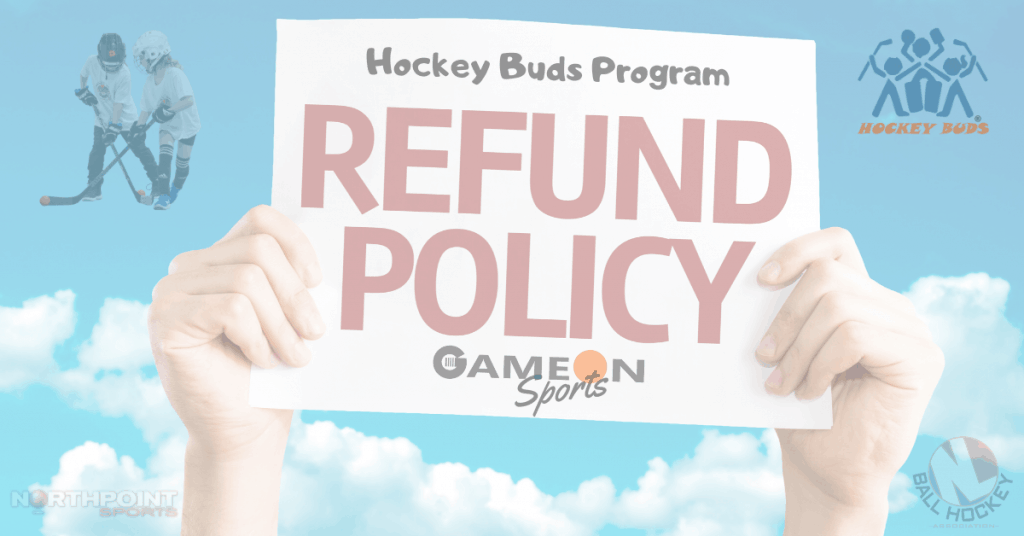 What qualifies for a refund credit?

Minimum one (1) week notice will receive a refund credit.

Start date of the program – no refund credits will be issued.

Full refund EMT (Email Money Transfer) will be issued if program is cancelled due to lack of membership.

How do I apply for a refund credit?

If for some reason your child is unable to attend our hockey buds program that they have been registered for, you can contact us prior to the start of the program via Email to refundcredit@hockeybuds.ca where you will then receive a full credit towards a future program of your choice depending on if the above criteria has been met.

A refund credit request must include name of child, Email Address of where the EMT (Email Money Transfer) originated and name of the individual who made the payment. You must also include the future program that you wish for your child to be registered for.

What happens to my refund credit if future programs are cancelled?

Full refund will be issued via EMT (Email Money Transfer).

Why do your program offer refund credits instead of of an actual refund?

We offer refund credits instead of actual refunds due to that majority of our expenses incurred are already paid for prior to the start of our program and we are a non profit program registered under the Newfoundland and Labrador Ball Hockey Association. 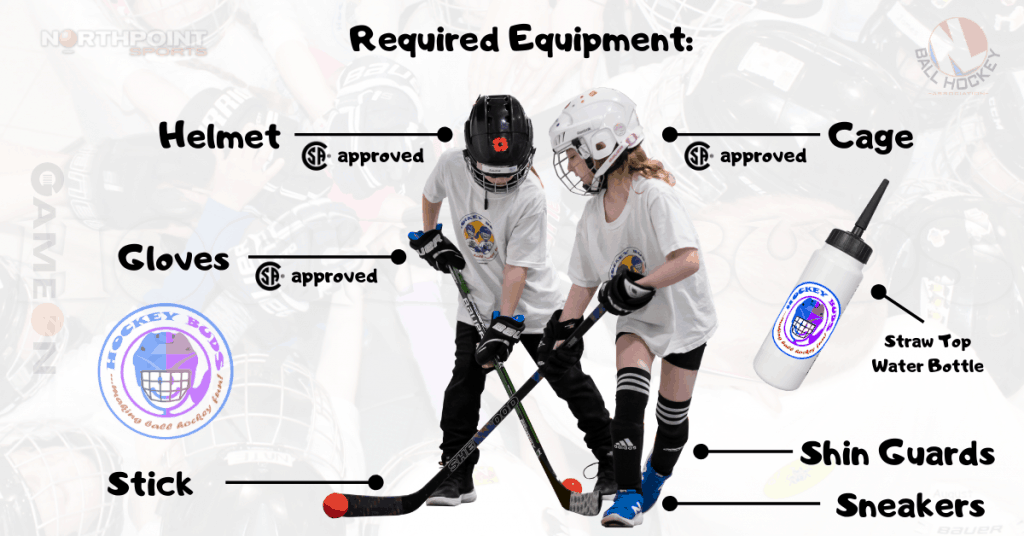 Children must always wear their helmets with full facial protection when on the playing surface including during the story time session.

Bring water as we have numerous quick water breaks.

We here at the Hockey Buds Program recommend the extended tip water bottle which will make it easier for your child to get a drink without removing their face protection on their helmets.  SportCraft | Canadian Tire | Walmart | SportsChek

We will have bottled water on hand for any child that forgets to bring their water bottles.

You can use the chart (see below) to help better determine the correct length for your child.

We also recommend asking a representative from the place you wish to purchase a hockey stick advice on choosing the correct stick for your child.

Long Stick – A long hockey stick is usually the preferred choice of the Defensemen. A long hockey stick gives you a longer reach, which makes it easier for you to poke the hockey ball away from attackers, intercept passes, and stop a hockey ball before it leaves your end. Defensemen are also known to have hard slapshots, and a longer stick (with the right technique) will provide more power on the slapshots. 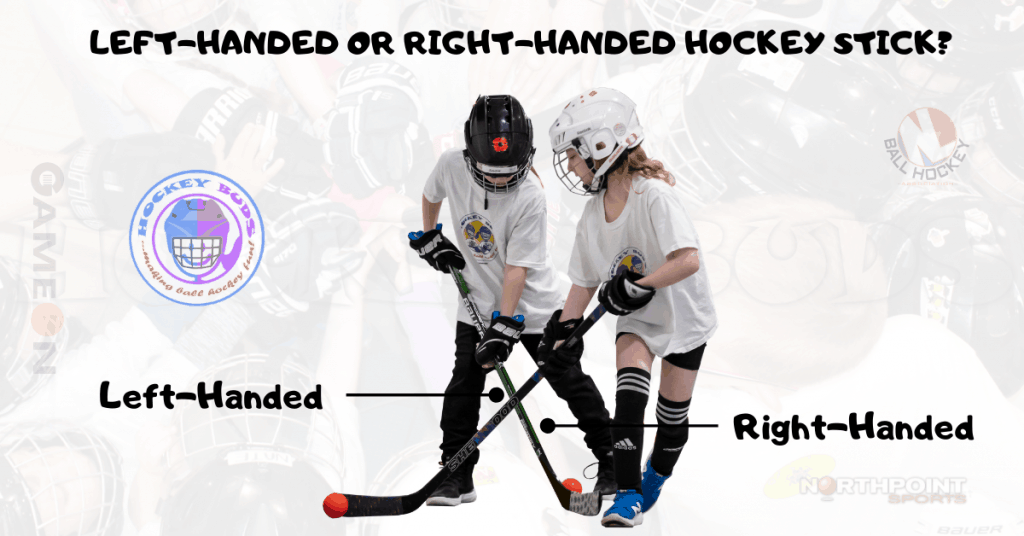 For beginner ball hockey players or hockey players in general, deciding which handed stick you need might prove a little more difficult than you may first think. If your child already knows which way they shoot, they are probably going to use that handed stick.

A couple of ways to help decide which handed stick your child may require:

1.) An easy way to figure it out is to actually pick up a baseball bat or stick. Which way do they naturally swing?

2.) Another way is hand positioning. The top hand on a hockey stick provides all of the control and touch, so it should be their dominant hand. An easy way to figure it out is to actually pick up a baseball bat or stick. Which way do they naturally swing? For really young children, you can have them use an empty paper towel roll. Always use caution and apply safety measures to prevent injury when swinging items.

If they hold the hockey stick with their right hand on top of the stick and their left hand down the stick, they are a left-handed shooter.

If they hold their hockey stick with their left hand on top of the stick and the right hand down the stick, they are a right-handed shooter.

Usually, if a player is right handed, they would play with a left-handed stick and the same applies for a left handed player (he/she would be use a right handed stick).

The hand at the top of the stick controls all stick handling movements and it is the hand that never leaves the stick.

Keep in mind, there’s no right or wrong choice when it comes to playing hockey. The most important aspect is that you feel comfortable. When in doubt, if they’re undecided, just go with the option that feels the most comfortable and natural to them. 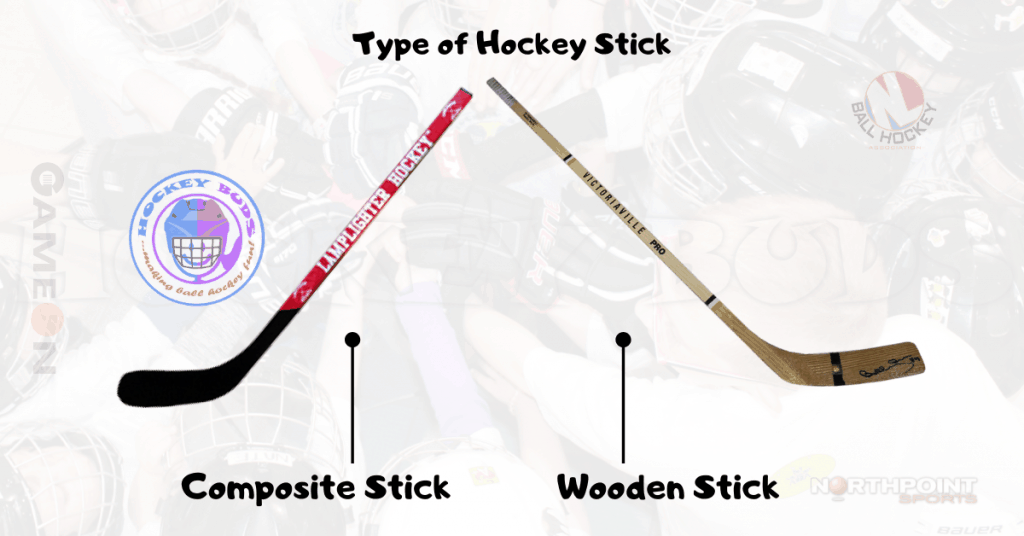 The Preferred Hockey stick for your little Hockey Bud for use in our program should be:

Hockey stick prices can range from $12.97 on depending on the type of stick.

Composite sticks are what most NHL players use today. Usually made from woven carbon fiber and fiberglass blends, they’re incredibly lightweight making them a consistent, high-performing stick.

Wood sticks are largely thought of as “old school” these days, mostly due to the technological advances seen in the hockey industry – but they’re still around and are actually a great choice for certain players’ styles. 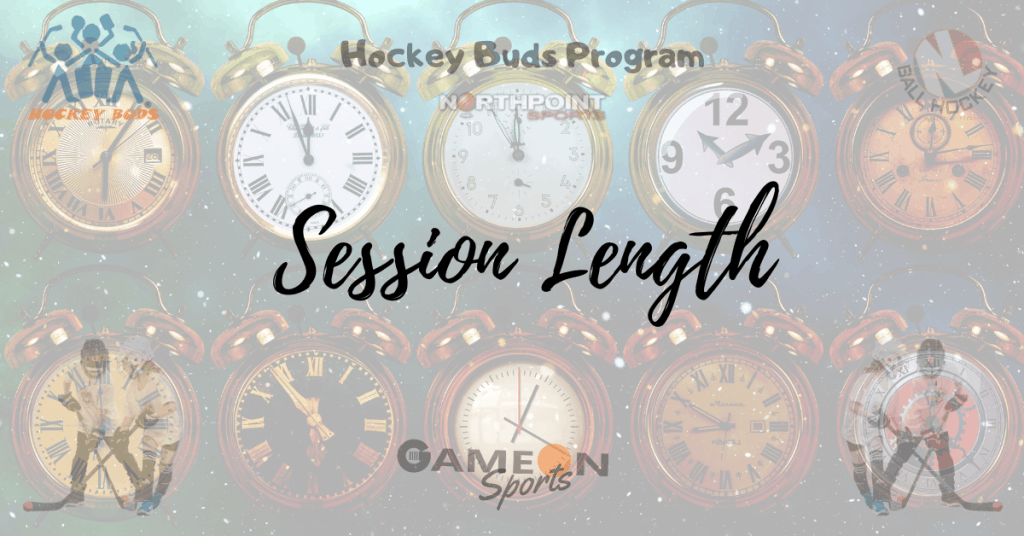 We strive to start every session on time and not wait for participants to show up.

Please try to arrive a few minutes before the start time warm up and be ready to start. 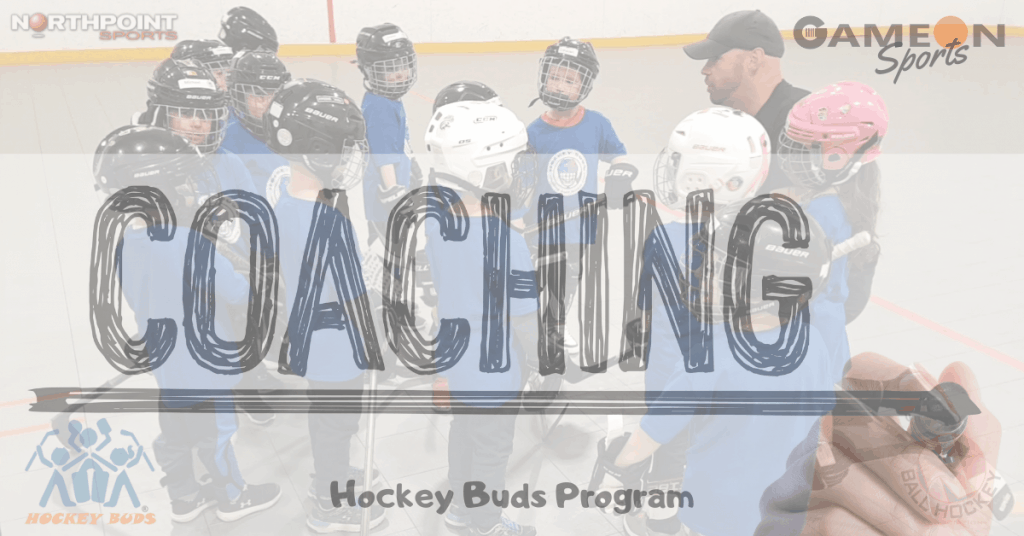 Our Hockey Buds Coaches and Assistants are highly motivated individuals who have demonstrated an exceptional ability to communicate well with young children.

Hockey Buds sessions are led by lead instructors alongside a team of assistants to ensure every participant receives plenty of attention and learning. We also believe that every child deserves to play, have fun and develop a life-long love of movement and sport.

Hockey Buds Coaches and their Assistants are registered with the Newfoundland and Labrador Ball Hockey Association. (NLBHA)

Majority of our staff have first-aid training. 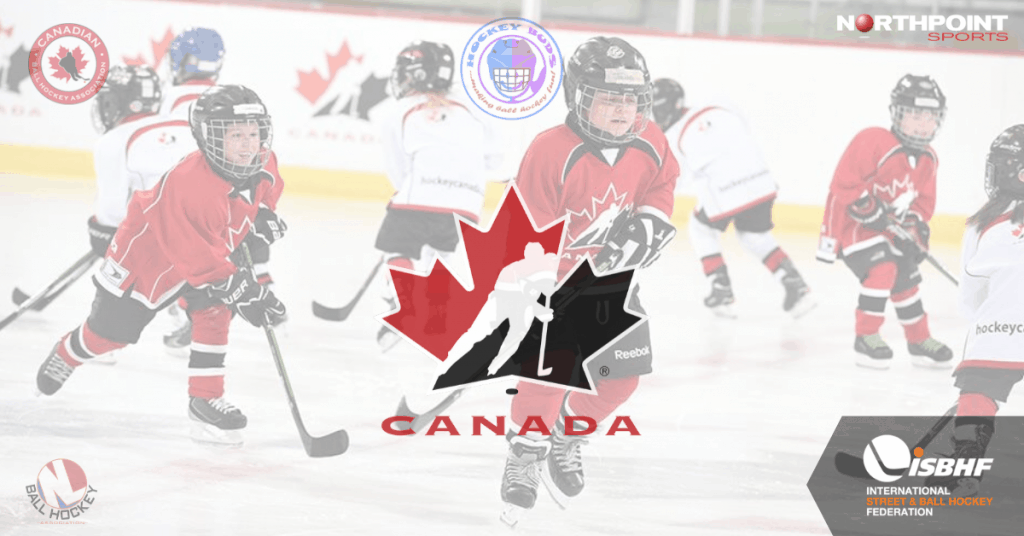 The NLBHA (Newfoundland and Labrador Ball Hockey Association) is a member of Sport NL.

In 1999, the Canadian Ball Hockey Association became an Associate Member of Hockey Canada to foster the growth of street hockey in Canada.